Around 35 Estonian and Latvian teachers and youth workers got together on August 21-23 for three days to discuss, learn and share best practices of developing media literacy and critical thinking among the youth within the frame of global citizenship education.
The three days were packed with innovative ideas and methods, groupwork and also fun around how good are we as adults at analyzing all that media input that reaches us whether we want it or not.

The first day started by Kadri Ugur (phD, University of Tartu) investigated the question of media education at school level in general and how biased or unbiased are we while processing media. After the lively discussion the group was divided in two and presented to three different tasks based on the European Commission campaign “No hate speech movement” and the freshly translated methodological handbook “Bookmarks – Combating hate speech online through human rights education”1. The first exercise challenged the participants into how do they confront cyberbullying at in their institutions. We concluded that not having  social media accounts does not protect you against the new forms of online bullying and in any case, it must be dealt with delicacy and persistency. The second exercise called “Wear and share” asked the question about the difference between real life behavior and online behavior. What is the information you would share online, and would you still do the same on the street? Some samples went to humoristic extremities, but helped illustrating the idea of privacy and security. The hardest exercise for the participants was about hate speech on social media – to decide who says it worst was not that easy to decide upon within groups and the difference between discrimination, prejudices, cyberbullying and hate speech was not always clear. (See more “Bookmarks”, Chapter 5). These somewhat personal workshops really helped opening our reality. The experience sharing with real life stories and problem solutions was highly valued by the participants.
Because the discussions were deep, and we needed to keep up the positive mood the second half of the day concentrated more on mainstream media and media campaigns – which social campaigns work and why. Different European campaigns were analyzed by the groups.
The topic of the second day was migration, internally displace persons and refugees in media. The topic moved from fake news – how to spot them, how they have been constructed and how to control sources – to the research made by Marlen Kakkori (University of Tallinn) on an Estonian Facebook group called “No to refugees”. All previous topics were more thoroughly treated in the global café where questions like “How to diversify the media consumption of the youth?” and “What are the good practices for developing media literacy?” debated and later shared for the future work of participants.

The latest helped to set the thoughts in order that were still a little puzzled from the previous day. Based on the fake news and depiction of refugees the participants were divided into small groups and went to discover the beautiful village and pine tree forests of Võsu. But not just randomly – the idea of the orienteering game was to find marked spots on the map where each group had to take a photo or a video according to the topic and the source. The groups got creative especially with the most radical titles putting into practice what they had previously analyzed.


The second day concluded with a lovely dinner cooked jointly by the participants of the summer school and Syrian refugee family who has been living in Estonia for over two years. The family shared their migration story and challenges integrating in the Estonian society. 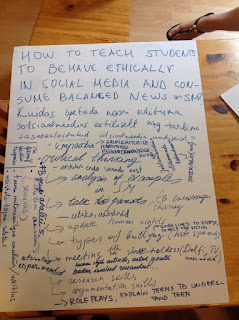 On the third day our Lithuanian guest Reda Stangyte held a workshop on fake news. The participants learned what is a hoax, a clickbite or a troll. And how to check whether information we see in the social media is true or not. Afterwards, Kadri Ronk, Social media expert gave some tips and tricks how to track other’s activity on social media, how false news catch their audience so easily and how to collect data that has been stored on oneself by Google or ther big media companies.
Despite the long days of cooperation, all participants confirmed they had broadened their areas of knowledge, gathered ideas for long time projects with their youth like campaigning and thematic days and built Estonian-Latvian partnerships for future collaboration. We all at #Mondosummersch2017 agreed upon wanting a #betternewsmedia and will contribute in achieving it with our youth groups!