Why don’t you ask us? - discussion tour in Latvia with journalist from Iraq

On October 11-13, 2017 a young journalist from Iraq, Haneen Jameel, visited Latvia on a discussion tour. Meetings and discussions with the journalist were part of the project “Better News Media” with the aim to raise media literacy among youth and awareness about asylum seekers, refugees and migration issues in order to fight racism and intolerance.
Events of the discussion tour were an opportunity to hear Haneen’s story about her work as a journalist in Iraq, the reasons why she had to leave her country and seek refuge in Europe, about integrating in Finland as well as how she sees refugee stories represented in European media. 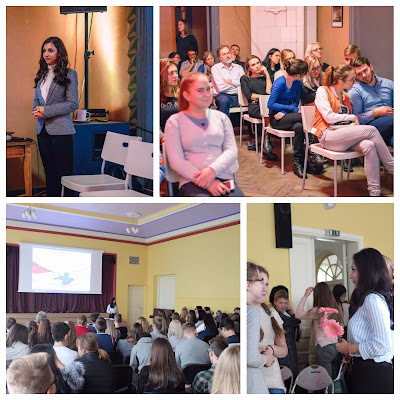 On October 11th a meeting with a few dozen journalism students, lecturers and other interested people took place at the University of Latvia Faculty of Social Sciences. The discussion was moderated by Latvian Radio journalist Kārlis Dagilis, who started off the conversation noting the press and media differences around the world which are proven by the listing of the World Press Freedom Index[1] where Finland is third, Latvia is 28th but Iraq takes the 158th place. After hearing Haneen’s story participants had a chance to ask questions and find out more about the reactions from her closest people and community after they read her honest and critical articles on children’s and women’s issues in Iraq, her family’s endless support, how journalism students in Iraq are taught to avoid critiquing the government and what she thinks of European media that often tend to prioritize the number of clicks over the quality of content as well as well as the rather negative impact social media has nowadays.

Haneen also visited centre “Marta” - a resource centre for women. This meeting took place on October 12th and it was an opportunity to share and exchange about the women’s rights situation in Latvia, Finland and Iraq. Representatives of the centre told more about the projects and campaigns they implement in Latvia and about projects carried out together with partners in Central Asia as well as shortly about the future ideas. During this conversation Haneen revealed that at first she thought of publishing her articles anonymously but then decided that she wants to give voice to the voiceless women and be part of the change in society and published the articles with her name.

Shortly before the meeting with representatives of “Marta” centre, Haneen gave an exclusive interview to Latvian Television[2], where among other things she emphasized how important it is to try to know one another better, accept and try to understand the cultural differences and strive to take down the wall of fear and prejudice between asylum seekers and Europeans. And despite the many negative news regarding refugees in European media, it is worth remembering that everything is not black or white, that just like in every society there are good and not so good people among refugees.

Later in the evening on October 12th, a discussion about asylum seekers, refugees and migration took place at Kaņepes Kultūras centre. This two-hour long discussion was moderated by the UNHCR Northern Europe regional office representative Didzis Melbiksis, who started it with a short introduction of the global refugee situation and statistics provided by UNHCR[3]. It reveals that at the moment there are more than 65,5 million displaced people around the world, more than half of the refugees are younger than 18 years old and almost 85% of all refugees are taken in by developing countries, e.g. Lebanon, Jordan, Uganda. The audience of approximately 50 people showed deep interest and asked Haneen questions about the political situation in Iraq and Middle East, about the reasons she had to leave Iraq, how she got from Turkey across the Mediterranean sea to Europe, what are some of the details of immigration system in Finland, attitude of the locals and Finnish language lessons.

On October 13th Haneen visited Gulbene gymnasium and met with approximately 80 high school students and their teachers, who had the rare opportunity to hear an Iraqi journalist’s story about her life, work and studies in Iraq, why she had to leave her country and seek refuge in Europe, how she got to Finland and how it is to start a new life there. Students and teachers asked more about her family and friends - where and how are they, how difficult or easy it is to get new friends in Finland, what are some of Haneen’s hobbies, dreams and plans for future.

At the end of the discussion tour Haneen was happy to visit the Latvian Parliament house Saeima and notice the similarities and differences between parliaments in Iraq and Latvia. Hearing that out of 100 deputies in Saeima 18 are women, Haneen revealed that there are many women in the Parliament of Iraq, but their impact is insignificant and mostly formal.