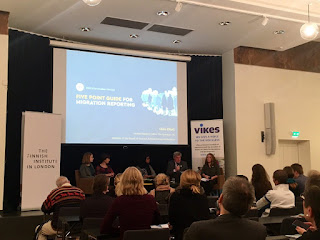 The international day of journalism was organized in Helsinki, Finland on the 14th October 2016, at Paasitorni conference and congress centre in Helsinki’s Hakaniemi district.

Vikes was in charge of organizing the international part of the programme. A wide range of topics related to world news with international guests and experts were discussed, and attendance was very positive: we reached approximately 90–95 people in our panels, and more than 1100 people who participated at least partly to some events.

The specific events were:

Stories that Need to Be Heard: Refugees in the Media

The Finnish Institute in London and the Finnish Cultural Institute for the Benelux published a report on how European newspapers write about the so called refugee crisis - and whose crisis it actually is. When talking about migration the voices of the refugees and asylum seekers are heard less than those of the European experts, politicians and authorities. What are the stories and voices that need to be heard? And how to diversify the reporting?

Why Don’t You Ask Us? How Refugees Are Working with the Media in Finland?

Many of the asylum seekers and refugees that have arrived to Finland have the skills and desire to continue working with the media. How is the media writing about their home countries? What would they like to contribute to the discussion in Finland? In a panel discussion, led by an awarded Finnish journalist Jeanette Björkqvist, the former and current refugees were asked to give their grade to Finnish and European media on their treatment of the so called refugee crisis. The panelists include former refugee and Vikes Project Specialist Wali Hashi, photojournalist and asylum seeker Habibi Hasmatullah and Edris Bayan Shenwarai who started a project called Reffin in collaboration with Startup Refugees network that supports the employment and entrepreneurship of asylum seekers.

During the past couple of years we have witnessed an influx of terrorism, crises and violence and the foreign news sections of our newspapers have been filled with pictures and numbers of dead people. The professional skills of journalists are measured in reporting on these complex global issues. How to find the real stories and sources? How we as journalists can move away from simply listing dead bodies and towards discussing the reasons behind the depressing headlines?

In the recent years, journalism has become a high-risk occupation, especially when exposing crime, corruption and human rights abuses. At the same time, the number of foreign correspondents has decreased dramatically and the use of freelance journalists has increased even in the most dangerous environments. What are the risks involved in reporting on conflicts, crimes and corruption? And how can we ensure the safety of the profession also in the future?

Director Tina Carr and Head of Programmes Mary O’Shea from the Rory Peck Trust and photojournalist Niklas Meltio dealt with these and other questions and shared their insights on journalists’ safety.